“Pit Bulls are some of the most misunderstood dogs out there. Unfortunately, they usually end up in the hands of the wrong people, and wrong people mistreat them, abuse them and eventually abandon them or get rid of them one way or the other,” writes Valia Orfanidou of Orphan Pet.

Matilda is one such dog. She was found on one of the busiest streets in southern Athens by a volunteer with SCARS, a dog rescue in the city. 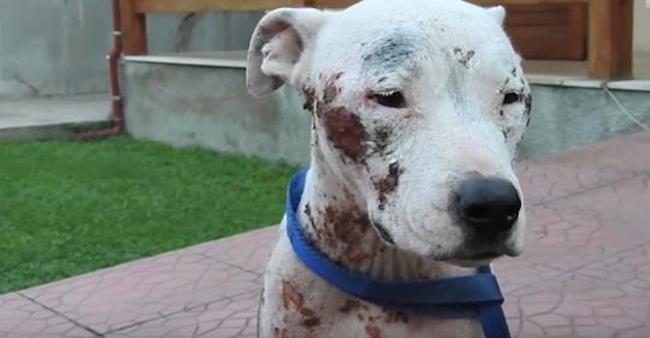 At first her rescuers though the wounds on her body were from dog fighting, but a closer examination revealed the real cause.

“She was bleeding from everywhere, and most marks on her skin seemed like dog bites, but we were wrong. Matilda’s entire skin is suffering, and entire pieces are falling off as you pet her,” writes Valia Orfanidou of Orphan Pet.

“She suffers from a horrible itch that must have been keeping her awake for entire nights. She has exfoliating dermatitis, that is caused by leishmaniasis. Sadly, this is very typical here in Greece.

“All those Mediterranean diseases, like leishmaniasis, ehrlichia etc are transmitted by parasites, and they can be easily prevented with a simple spot on once a year.”

“Apparently, Matilda’s owners were too frugal to provide her with spot ons and too frugal to take her to the vet and have her treated for leishmaniasis after she got sick, so they came up with the typical solution of abandoning her on the streets.”

“Seriously…What is wrong with people? Leishmaniasis can be treated, and many dogs can make a full recovery. Our vet is very optimistic that Matilda will recover very well, and she has already started her treatment.”

Matilda is now in a foster home and living with three other dogs. “And she finally enjoys proper love and affection” says Valia. When she is healthy enough, Matilda will be available for adoption through SCARS.