Home Dog Story Homeless Celebrates The Birthday Of His Beloved Dog By Throwing A Sweet...

It is not that only money can make you great. It is the kindness that you have for living beings that makes you great. If you are kind, you are the happiest person in the world.

Your kindness can win the hearts of the people. Dogs are a source of happiness for many people. They provide great comfort to people but you should be kind enough to enjoy it. 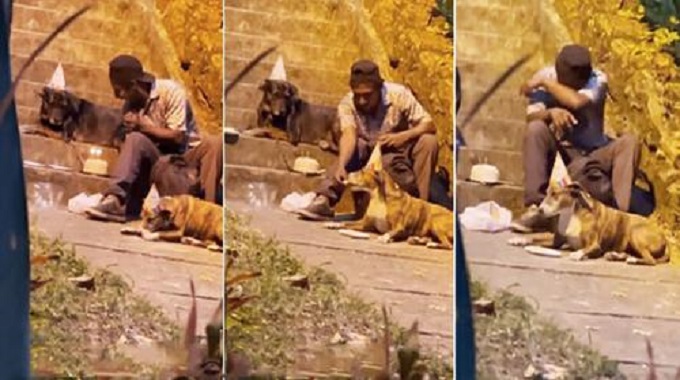 Dogs have provided great companionship to people especially if one is homeless. Some people go over and beyond for their loved dog. It is not necessary that one has to be rich to do that.
Here is a homeless man who did something unexpected and heartwarming for his dog. He gave a party on the birthday of the dog.

A stranger saw it and recorded the whole incident. The name of the man is Choco Jose Luis Matos who has been living on the streets of Colombia for many years. 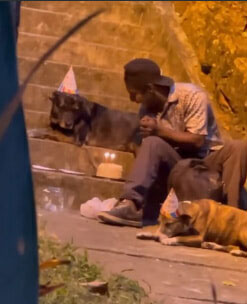 He became homeless after escaping from an abusive home. On the streets, he not only fend for himself but also looked after his two dogs, Nena and Shaggy.

Recently, he celebrated his dog’s birthday which caught the attention of the bystander and his story was brought to the world.

The stranger saw the dogs wearing the party hats in a park in Bucaramanga, Columbia. Then Choco came singing the song with a cake having candles. It was actually his dog Shaggy’s birthday and he gave a surprise birthday party to his beloved pet. 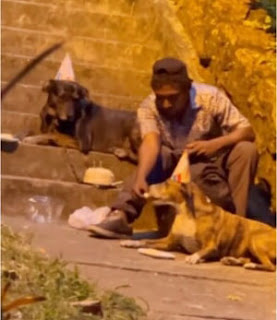 The whole sweet act was recorded by the stranger and the video soon went viral. Many people were moved by his sweet gesture and offered to help the man.
The video has made Choco a local celebrity with people offering him food and supplies. People are gathering around him and his pets to get photos.

As the help is pouring for Choco, it is clear that soon his life will turn around. Choco says that he wanted to pursue music and open an animal shelter.

Advertisements
We hope that his wish should be fulfilled. It is really a heartwarming story and we are happy that Choco and his dogs are getting the help.