Home Dog Rescued Dog was stuck in a river for days. The moment rescuer is...

Dogs that live in streets are often faced with different dangers, but thanks to kind humans they receive the needed help. 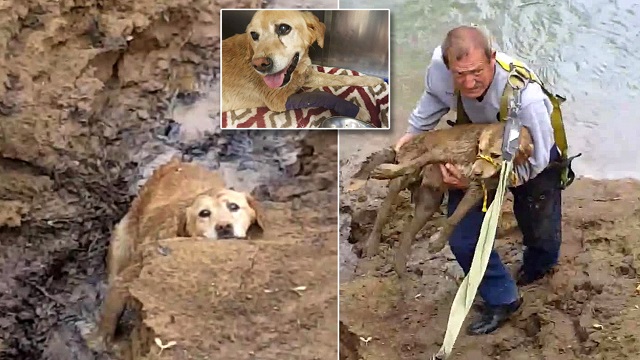 On April 25, in Ulysses, Kentucky a poor dog in danger was rescued after being trapped in a river bank for days, according to the rescuer who helped the dog to get out of that dangerous situation.

Darrell Perkins published the rescue video on his Facebook page, and he told for Storyful that Ginger the dog, was missing for days before they heard her howling coming from a river nearby.

In the video, you can see poor dog who is scared and out of energy, but the rescuer does an amazing job ensuring scared creature that everything is fine now and he is safe and out of danger.

Poor Ginger was so weak, couldn’t even walk up the hill, and if she wasn’t rescued now probably soon will have drowned.

But thanks to the heroes that rescued her, she is now safe and in her recovery road at a local animal hospital and they are sure the dog will make a full recovery.

Thank you kind human heroes, who give all to save the poor animals.