Home Dog Story βlind Dog Has His Own Personal Service Dog To Help Guide Him...

Kimchi was βlind and living on the streets. But since meeting Ginger, his life is so much better!

A blind cocker spaniel named Kimchi has his very own guide dog to help him get around. 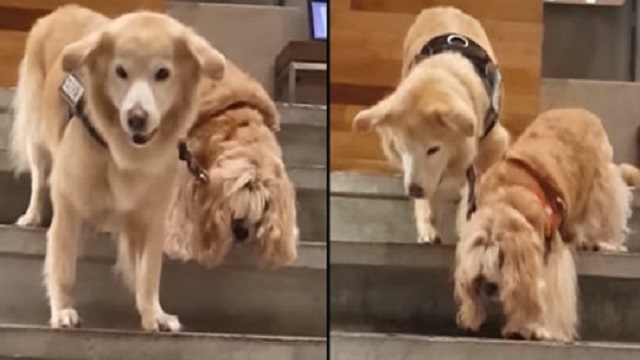 In this heartwarming video, Ginger the Golden Retriever can be seen patiently leading Kimchi as they go down the stairs.1111

The pair, who live in the Philippines, regularly visit hospitals, schools and companies to provide emotional support to people needing it.

Kimchi, the 10 year old dog, knows a thing or two about compassion and survival, after he was found abandoned in the streets.

The videographer writes via Newsflare, “He was thin, mangy, weak, with flea-infested matted fur, and already blind. He was later adopted by a family with a Golden Retriever mix called Ginger, who is now almost 13 years old. Since then, a very special bond has developed between the two.”222

Watch the sweet bond the two have in the video below.