A heart touching story of a dog has been catching the attention of people around the world. The dog goes to the beach everyday to wait for his fisherman owner to return. 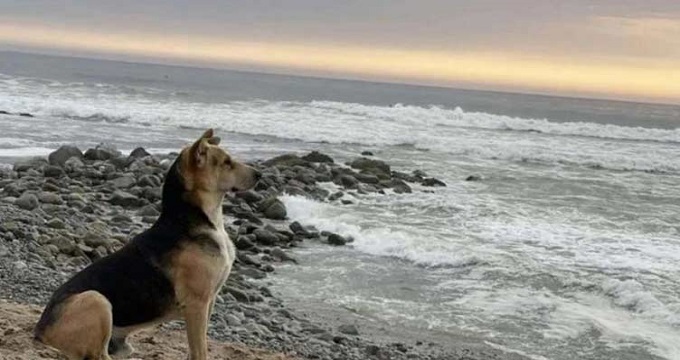 The story of a dog named Vaguito was narrated by a Peruvian woman who had seen the animal staring into the never ending ocean as she was walking on the coast of Punta Negra, a district of Lima Province.
Jolie stayed with the dog petting him as the animal seemed to be well fed and clean so she assumed that the owner will be back for him. But then she was told the sad story of the loving creature from a man who was passing by.
The man told Jolie that everyone in the area is familiar with Vaguito and his story. His owner used to be a fisherman who went out in the sea one day never came back. The dog was his constant partner and accompanied him everywhere. One day he said goodbye to his owner as he went out into the sea and never came back because he d/i/e/d.

Vagutio now lives with a woman who takes really good care of him but he still comes here everyday and waits for the fisherman to return.

Advertisements
Jolie explained the story of Vagutio in a Facebook post that later went viral as people can’t help themselves from showing affection towards the loyalty and true love the animal showcased for his human.

“He told us that the dog had lived with a fisherman who passed away some time ago, and that, since then, he comes here every day and looks at the sea, waiting for him to come back,” Jolie added in her post.