“Anyone missing their frozen turkey?” That’s what Jenny Jones and her friend Kathy Wyrick thought when they spotted something strange in the middle of the road around the Round Mountain area in Conway, Arkansas. 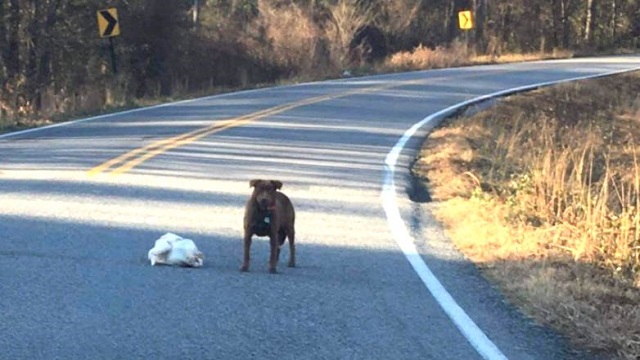 There, in front of them, was a dog and on the ground next to him a giant raw Thanksgiving turkey!

They took a photograph for posterity and to share the funny scene with their friends. Kathy posted the picture to Facebook and wrote:

“Anyone missing their frozen turkey? If so, this Conway dog proudly had it in the Round Mtn. area.”

“He had stopped in the road and was proudly displaying his find,” Kathy continued. “He picked it up and moved on after the photo was taken.”

Her humorous picture quickly went viral and cheered everyone up. It also started a flurry of comments from people wondering about the dog and how she came to snatch the turkey.

The dog’s identity was later discovered as one of the commenters shared the photo of the naughty pooch.

Kathy wrote, “The mystery is solved. Her name is Nola!”

Indeed, Nola’s human, Cole Baker shared a photo of Nola with his daughter and commented, “For everyone wondering, her name is Nola and she is safe just a little on the full side ”

We expect that Nola’s family will need to hide their turkey from Nola this year, just to be on the safe side!