Everyone who decides to take in a dog should really consider they are taking a child into their life , and not a piece of wood that they can replace or leave whenever they feel like they are getting bored by them. 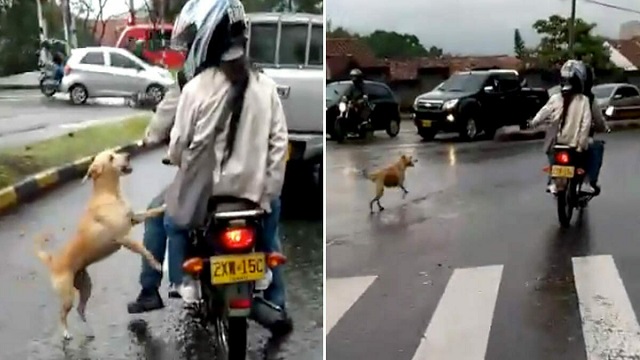 A viral video that has been shared is breaking hearts around the world by the sad content, the footage shows two people on a motorcycle that push their dog into the streets and hurry away.
The poor dog having so much trust in them, just couldn’t accept he was being abandoned so he starts to chase after the motorcycle and attempts to jump in several times and they push him off every time he gets near, not caring from the dangers he was facing from the heavy traffic the dog still runs after them, he nearly gets hit several times while running after his owners.
It was just unacceptable, how can someone sees their best friend , their family member feeling so betrayed and they are so cold to not show any emotions but continue their journey as if they didnt break that little doggie heart.
We hope someone will find this poor animal that has so much love to give , and welcome him in a warm loving home.
Advertisements