This touching video shows a team of rescuers as they work tirelessly to save a dog after it fell into hot tar in western India.

The animal was left unable to move after it slipped into the thick, sticky substance and it cooled – coating its fur in a solid layer of tar. 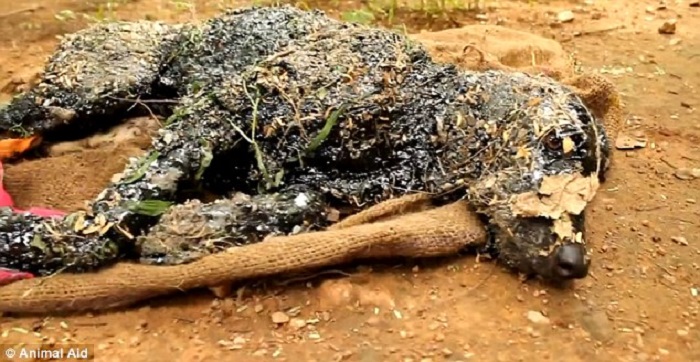 A passer-by spotted the dog as it lay on the ground covered in dirt and twigs, and phoned a local rescue centre based in Udaipur, Rajasthan.

Scroll down for video

Desperate: The dog, seen covered in twigs and leaves on the ground, was left unable to move after the thick, sticky substance solidified – coating its fur in a rigid layer of tar

Gentle: The team from Animal Aid Unlimited work to slowly free the animal from the rigid layer of tar. They use vegetable oil to soften the substance – pulling clumps of it away as it comes loose. 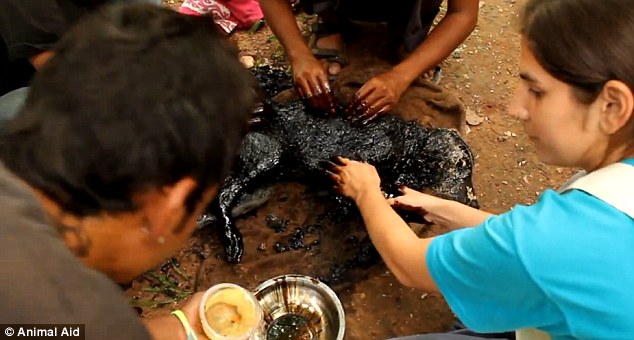 The video shows a team from Animal Aid Unlimited as they begin to work on freeing the dog – slowly massaging tar from its limbs and body as it lies on the dirt.

The rescuers use small amounts of vegetable oil to soften the tar, gently pulling clumps of the congealed substance away as it comes loose.

While the team work, the dog can be seen blinking slowing into the camera – trying to look at everything that is going on around him.

The rescuers, who worked over two days to free the animal, described the tar as being ‘as hard as rock’. 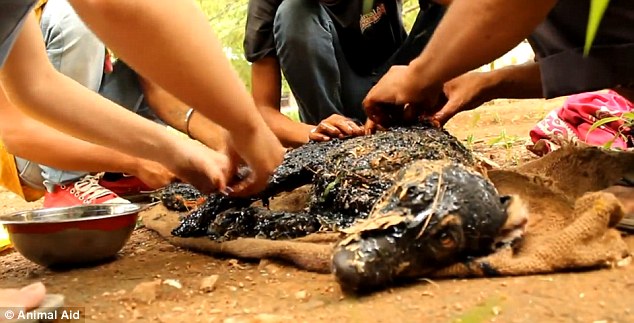 Helpless: The dog can be seen looking around at the rescuers as they work to save his life. The animal was spotted by a volunteer as it lay on the ground 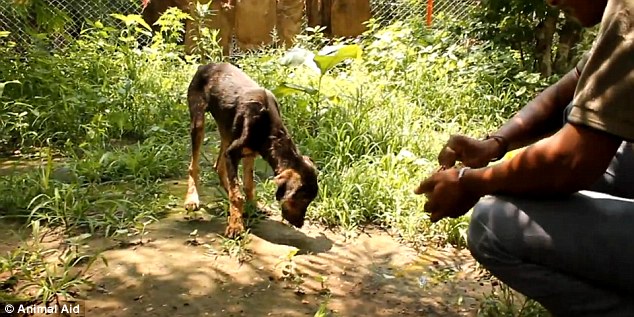 Unrecognisable: At the end of the video, the dog can be seen happily playing with a volunteer, its chocolate-coloured coat now visible.
Advertisements

Friendly: The dog wags its tail as it is fed snacks in a lush garden. Every year the team rescues thousands of hurt and sick animals and provide sanctuary to those who need life-long care

At the end of the video, the dog is unrecognisable – its chocolate-brown fur visible for the first time.

It happily wags its tail as it is fed by one of the volunteers, moving around easily in a leafy garden.

Animal Aid is a rescue center, hospital and sanctuary for injured and ill street animals in Udaipur, Rajasthan, India.

Every year the team rescues thousands of hurt and sick animals and provide sanctuary to those who need life-long care.