Home Dog Story Courthouse Dogs Help Give Victims Of Crimee The Courage To Testify
The children were traumatized, so they found the one thing that made all the difference… 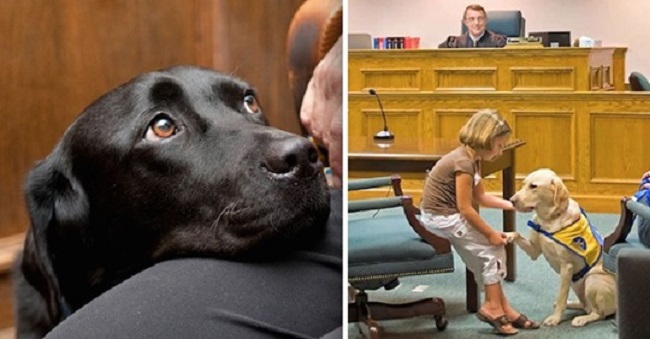 Going through a t.r.a.u.m.a.t.i.c ordeal is a difficult, painful process, but many v.i.c.t.i.m.s must relive the event when they enter the legal process and must confront the defendant in a court of law.

Witnesses, especially children, often struggle under the pressure of such situations. That’s why Courthouse Dogs was established. 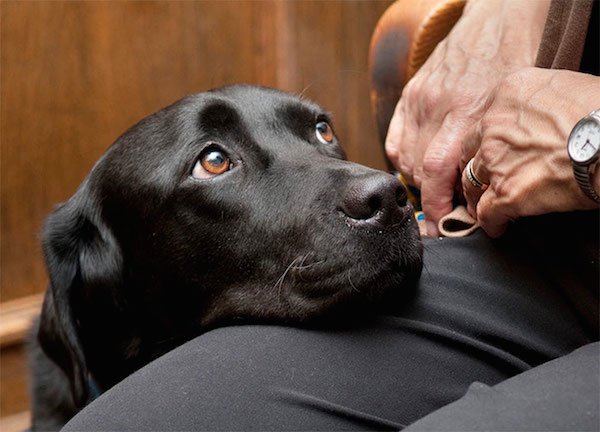 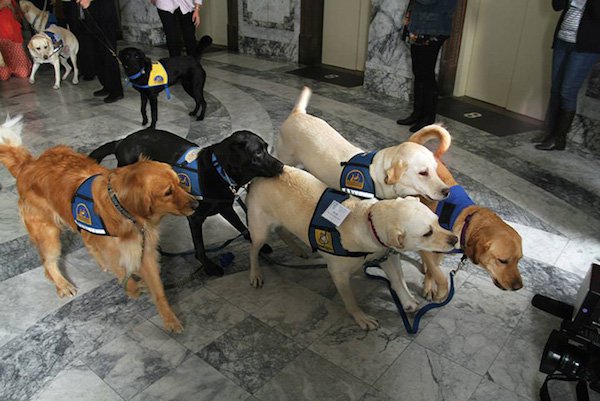 The nonprofit organization specifically trains facility dogs for use by legal professionals to help comfort witnesses in the courtroom. 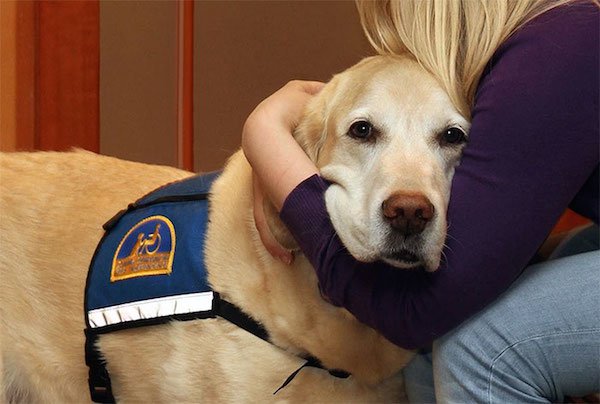 A facility dog is not like a service dog, as the dog does not assist a person with a disability. Instead, the facility dog assists professionals by improving the quality of their work.

The dogs are specially trained not to distract from courtroom proceedings and are trained to interact with v.i.c.t.i.m.s and/or witnesses who may have to testify in court. 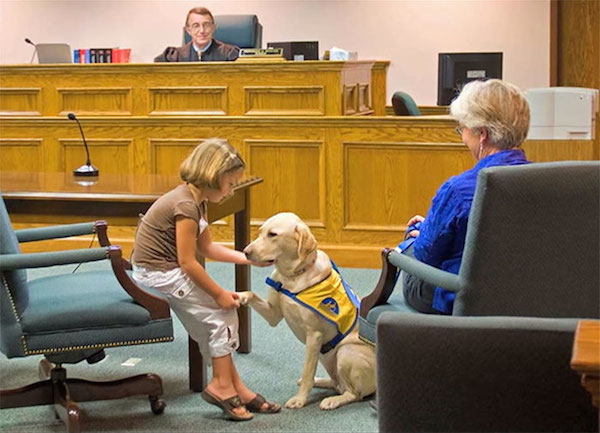 Ellen O’Neill-Stephens got the idea that dogs could help while she was working as a deputy prosecuting attorney. “I saw how stressful it was for v.i.c.t.i.m.s and witnesses to testify in trials. It seemed like there had to be a better way to seek the truth without causing emotional harm to people.”

“This idea occurred to me when my son, who is disabled, got a service dog named Jeeter. When I saw how comforting this dog was for him, and everyone else that encountered this dog, I realized that this type of dog could help people through the legal process.” 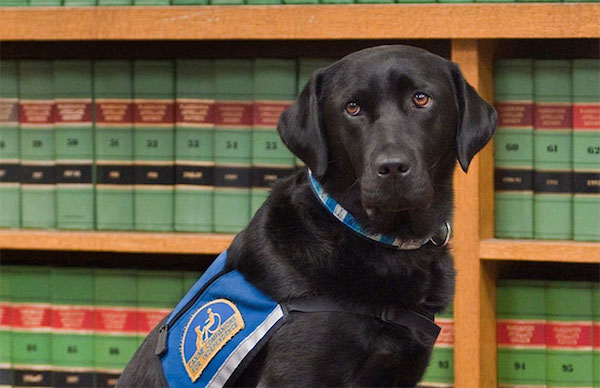 The dogs that work in courts must pass the same tests that certified guide dogs go through to ensure they are safe in public. That’s why it can take up to two years to train a facility dog in what to do.

“Unfortunately, it takes some time on the waiting list to acquire a dog,” Courthouse Dogs says. “But it’s well worth the wait.” 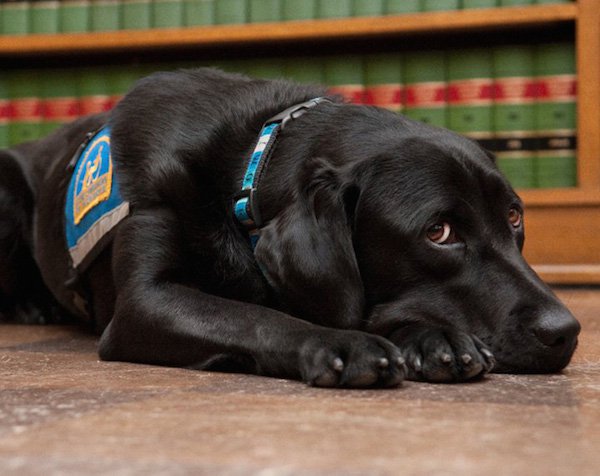 Dogs with the gentlest and quietest natures are the best fit to become courthouse dogs. Although it can take some time to establish a courthouse facility dog program because of the political stakeholders involved, there are many success stories as result of the dogs.

One of Ellen’s favorite success stories shows how one of these dogs can make a difference. She recounted:

“A five-year-old boy saw his mother severely beaten by her boyfriend. In addition to that, the boyfriend poured gasoline on his mother and him and threatened to set them on fire. The little boy made the 911 call, and he and his mother were soon placed in a shelter for their own protection.” 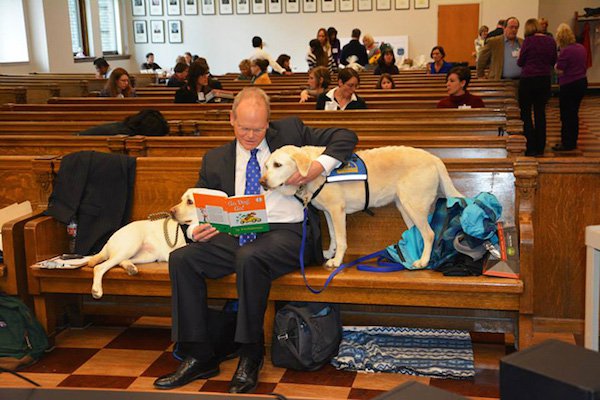 “However, the little boy was so t.r.a.u.m.a.t.i.z.e.d by this, that he stopped talking altogether. When pressed, he would put his hand down his throat as if he were trying to vomit. He was brought into the King County Prosecutor’s office to speak with an interviewer about what happened.”

“After his mother explained to the interviewer that her son was unlikely to speak, the interviewer asked the mother if her son liked dogs. She said that he loved dogs. So, he meet a courthouse facility dog named Ellie, and the two of them played together before the interview began.” 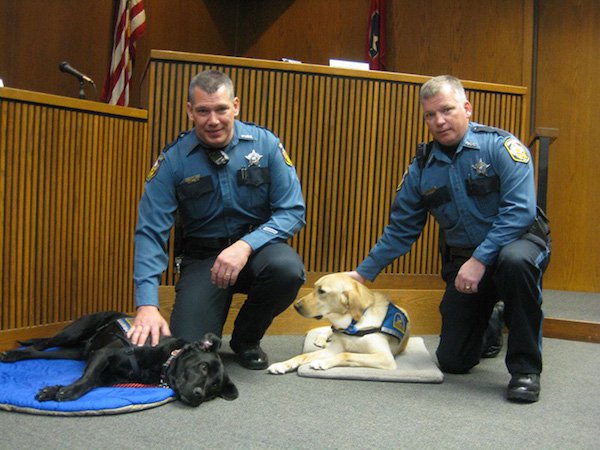 “Once they began the interview, Ellie snuggled beside him and he was able to tell the interviewer what happened for the first time. When the boy would struggle for words, she would snuggle in closer”

“At one point after this happened, he told the interviewer, “see, Ellie loves me.” Because she was there to provide this comfort, he was able to finish the interview, and before they left the room, he kissed her.” 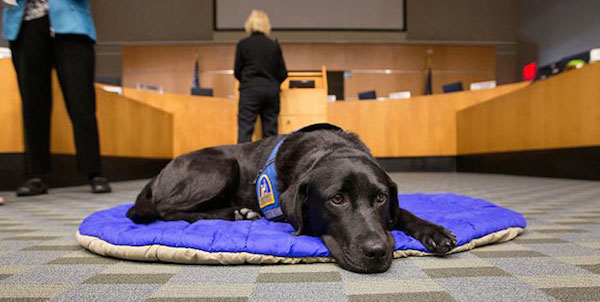 Share the important work that courthouse dogs do with your family and friends!