For over 8 years Officer Rick Broz has been dedicated to protecting animals in Lorain, Ohio. He has helped reunite hundreds of lost dogs with their families and championed stronger animal cruelty legislation. 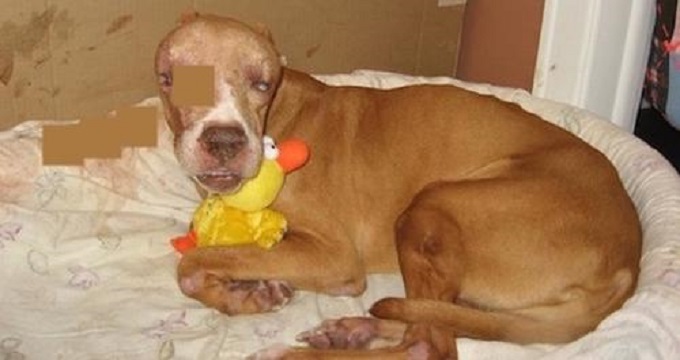 He has also personally rescued neglected and abused dogs. One such dog was Herbie, a Pit Bull mix who he found after the police department received an anonymous call. Here is Herbie’s story, as it originally appeared on DogFull back in 2013.

He had never seen a dog so emaciated and still alive in his life. That’s what Patrolman Rick Broz, (or Doc, as Officer Broz’s friends call him), thought when he found a Pit Bull mix curled on the ground outside an abandoned home and barely able to move.

Police in Lorain, Ohio had received an anonymous call in December about the abandoned dog and Officer Broz responded to the call. He could hardly believe what he was seeing. The starving dog was blind in one eye, with a fractured skull and his head swollen with infection. In his official police report Officer Broz described the dog he rescued:

“I observed a light brown dog, possibly a pit bull, lying in the grass. Every rib, vertebrae, and leg bone could be plainly observed beneath its skin. I have never seen such an emaciated dog, still alive, in my career. A dog of this type should weigh around 75 or more pounds and this dog appeared to be around 25 to 30 pounds.

The top of the dogs head was grotesquely swollen, apparently from an infected puncture wound, to nearly twice its expected size. The swelling actually was forcing the dog’s eye lids closed. Yellow-green purulent discharge was seen coming from both eyes.” 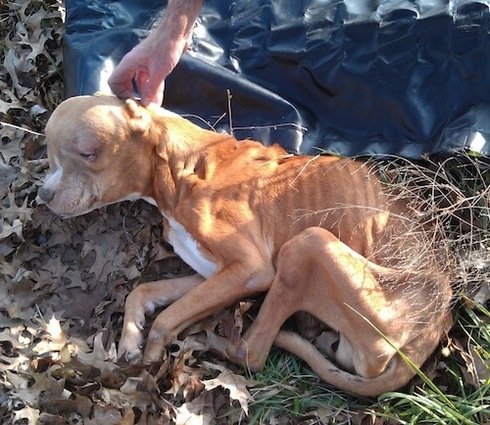 Officer Broz took the dog to Lorain Animal Clinic. They named him Herbie and began emergency treatment. Given his poor condition, they knew the dog’s recovery would be ‘touch and go’. But within a few days, Herbie’s condition improved. The swelling in his head reduced quite a bit and is appetite slowly began to increase. Within a week and a half, he had gained back a bit of weight and was really enjoying his trips outside, wagging his tail like crazy every time he went out.

Just after Christmas, the staff learned that Herbie has adenocarcinoma, a non-operable and non-responsive cancer. It was sad news given the progress he had made battling his weight loss and injuries. Dr. Woods and the staff at the clinic have said that his cancer has not progressed enough to interfere with his quality of life.

“He looks forward to his walks outside. At this point in time Herbie is happy, eating well, and most importantly pain free,” the clinic posted on its website. But, because of his cancer, Herbie will not be adopted. 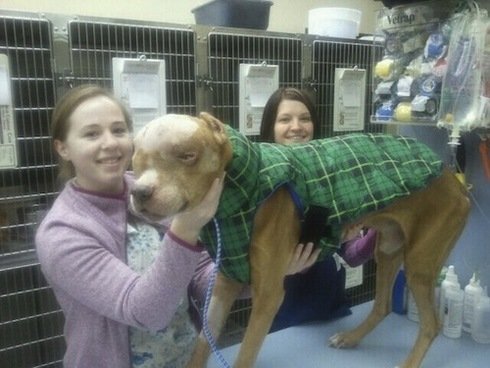 Throughout Herbie’s time at the clinic, Officer Broz has stayed involved in Herbie’s progress and clinic staff say that Herbie has truly bonded with his rescuer. “He sure has Officer Broz wrapped around his paw!” “The boys are back! Herbie is back at my house, resting comfortably in his bed. He seemed to know what was happening as he seemed excited when he realized I was there at the clinic. I was told that he has been much more active during the last three days, so I guess my spoiling him worked!

He was quite restless during the ride home in the Jeep, kept getting up and ‘looking’ around like ‘are we there yet?’ In the house, he felt completely at ease, went to where his freshly laundered bed was and climbed in to lie down. Still a little early for him, but after he rests a little and eats, I’ll bring him downstairs to the “Man Cave” and we’ll kick back, have a few brews, watch some NASCAR….you know, ‘guy things.’”

This past weekend, the pair took in the Super Bowl together and caught ‘The Puppy Bowl’ as well. While watching the pups on TV, Herbie got a “little vocal” whenever the referee “blew a call”, according to Officer Broz.

Officer Broz says he will continue to provide a kind and loving home for Herbie and take each day as it comes.

“We don’t know how long he will live. Days to months? As long as he is happy, pain-free, eating and not dropping weight, and shows no signs of the cancer affecting his mind, we will keep him going.” 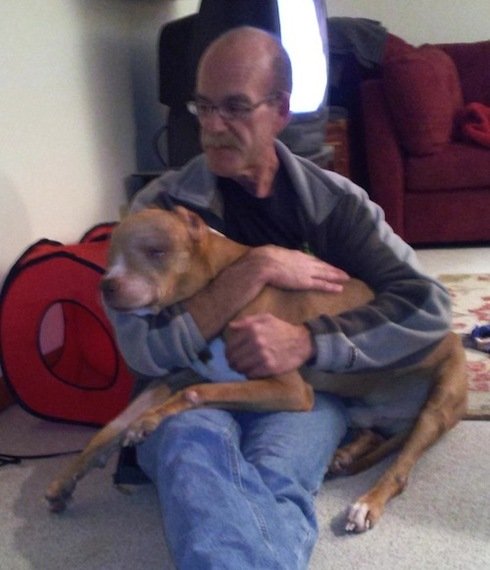 At the time of Herbie’s rescue an $11,000 reward for information leading to the person(s) responsible for Herbie’s abuse and neglect was offered. Herbie was found in front of an abandoned home on West 11th street in Lorain, Ohio on December 1, 2012.

Animal lovers in Ohio state are also rallying for stricter laws for animal cruelty. To learn more about the recently declined animal cruelty bill – Nitro’s Law – and the necessity for stricter laws in the state to protect dogs like Herbie visit the Nitro Foundation website. [eds note: the Nitro’s Law bill was successfully signed into law in 2013.]

Herbie passed away peacefully in Doc Broz’s arms around 2pm on Friday. “I know that if he could talk, he would tell all of you how much he loved each and every one of you and you were the reason he was able to fight for so long,” Broz wrote on his Facebook page.

Many in the DogHeirs community shared how much they appreciated Officer Broz’s compassion and care for Herbie. Leissa W wrote, “Oh Herbie, you got the best gift ever – to pass on to a better place while being comforted by your best pal. Run like the wind – nothing is going to hurt you there. Officer Broz – you are an inspiration.”

Kathy commented, “Thank you Officer Broz for loving this dog when no one else did and Doc Woods and staff for your compassionate treatment of this poor soul. How inexcusable that so many animals are so poorly treated, so horribly mistreated. Thank God he knew love and caring his final months on earth … may Herbie find peace at the Rainbow Bridge.” and humboldtrick wrote, “Doc, you are a wonderful person. Know that you are one of the good people in the world. Herbie certainly does. He is lucky you found him.”