Dogs are the best pets to keep in our lives, they are forever loyal to us and from time to time they even became heroes in saving our life.

In Brisbane, Australia a German shepherd has left everyone shocked after she managed to trade water for 11 hours after the boat of her owner sank off the coast and thanks to her stoicism her owner was rescued as well. 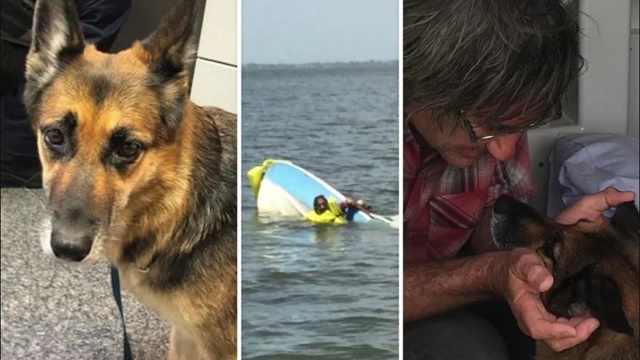 A group of fishermen spotted the pup and to them it was really strange seeing a dog swimming alone while being surrounded by some floating items, including a tackle box, a fuel tank and many others.

One of the fishermen reached the Moreton Bay police department which initiated a rescue soon.

Firstly they pulled the tired dog out of the water, the heroic pooch that was identified as Heidi later was sent to a vet clinic to get the medical help she needed.

The dramatic rescue continued as a helicopter, four police vessels and Coast Guards arrived at the scenes the ABC News reported.

The rescue team managed to find the dog’s owner a few minutes later.

He told the authorities later “that the boat lost power the evening before and began to take on water.”

He also said he and Heidi were separated the moment the boat began to sink.

From that moment, the brave pooch managed to swim 11-hours until she caught the attention of the fishermen.

Thanks to her incredible heroic efforts, her owner is alive.

Both the dog and the owner are safe now and managed to get through this difficult experience without injuries.

The police released a safety reminder for all those who’re venturing offshore, shortly after the incident.

“We would take this opportunity to remind boaties to plan for the worst when they’re out on the water,” Senior Sergeant Bairstow said. “Always wear personal flotation devices and ensure that your safety equipment, including EPIRBs, are tested and in good order. Thankfully there was a happy ending to this search and Heidi was able to be our honorary PD for the day.”

One more story to show us how grateful we should be having these animals as our pets and best friends.